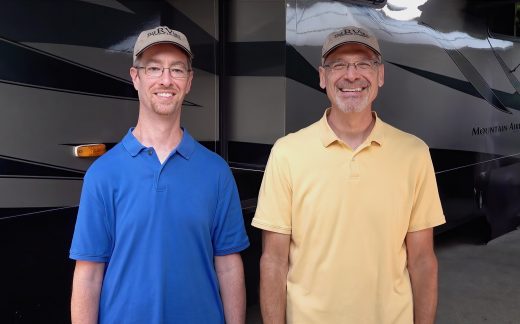 where can i buy Ivermectin RV Geeks

get modafinil prescribed in canada When they first hit the road, their intention was to explore North America for a couple of years, identifying some great new place to settle down along the way. Since they hadn’t planned to continue RVing for very long, they also hadn’t planned for earning a nomadic living.

As their interest in staying mobile continued to grow, their savings continued to shrink. So they pooled their combined skills to create a website design company, catering exclusively to RV parks. RVgeeks Website Design was born.

A few years later, John & Peter started making How-To videos for friends who’d just bought their first RV. They also made the fateful decision to post those videos publicly online, where they took off. The RVgeeks had accidentally created one of YouTube’s most popular channels about RVing, which they followed up with a blog to augment their video content.

In 2018, the success of their channel brought yet another opportunity: broadcast television. They signed on as co-hosts and co-executive producers of a new TV show, The RVers, which is currently filming its 4th Season for the Discovery Channel and PBS.

From websites to videos to blog to TV, John & Peter’s entrepreneurship and earnings have grown organically over the years. They’ve gone from zero knowledge or experience in earning a nomadic living, to managing multiple successful location-independent business ventures simultaneously, with no end in sight.

http://heirloomflowersandballoons.co.uk/wp-content/plugins/core/ Presentation: Unsure of Your Vision, Talent, or Plan? Become An Accidental Entrepreneur!

We think that one of the greatest gifts in life is knowing what you’re meant to do.
Since so many people probably fall into the same category as us (still figuring out what we want to be when we grow up), we expect that sharing our own self-doubt, but becoming successful anyway, will resonate. We plan to share our successes, as well as our failures. We want to share what worked, what didn’t, why, what we learned from the good, bad, and ugly, and how to build on what works and bail on what doesn’t.